Skip to content
Got a question? Toll free: 1 (800) 299-0623 | Support Ticket & Knowledge Base
FacebookTwitterLinkedinYoutubeInstagramEmail

The Implementation
The factory chose Forms Manager primarily because it offered the flexibility they required to adapt to their unique requirements. Instead of a lengthy implementation, Forms Manager’s cloud-based software was up-and-running in 2 weeks. Weever customer success staff worked with the factory’s app administrators to build forms and train staff.

The Results
Within one year, the factory increased incident reports and other forms of staff participation by over 300% and reduced the average time to close by over 400%. Best of all, they increased their Factory Efficiency (OEE) by 11%! 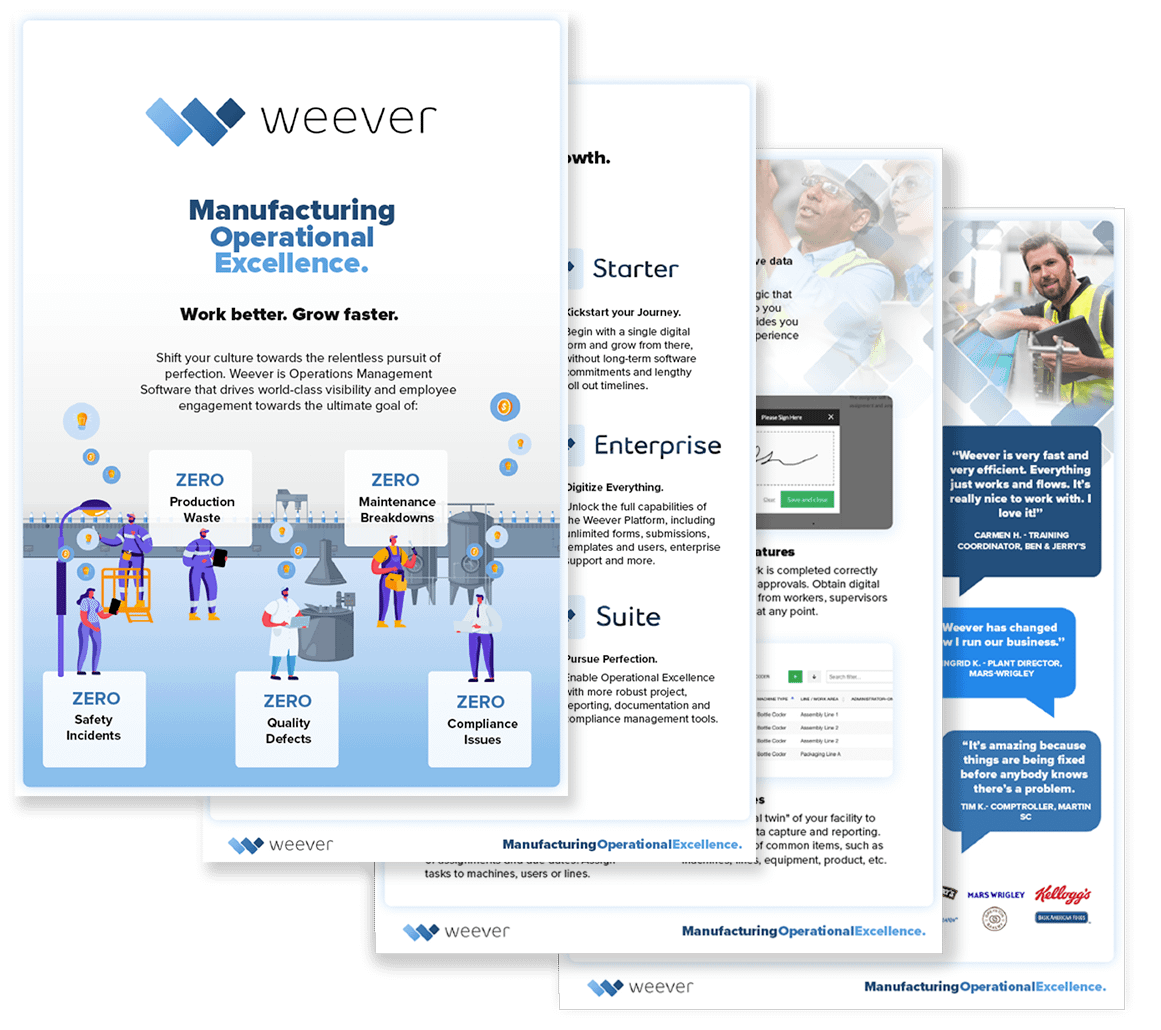 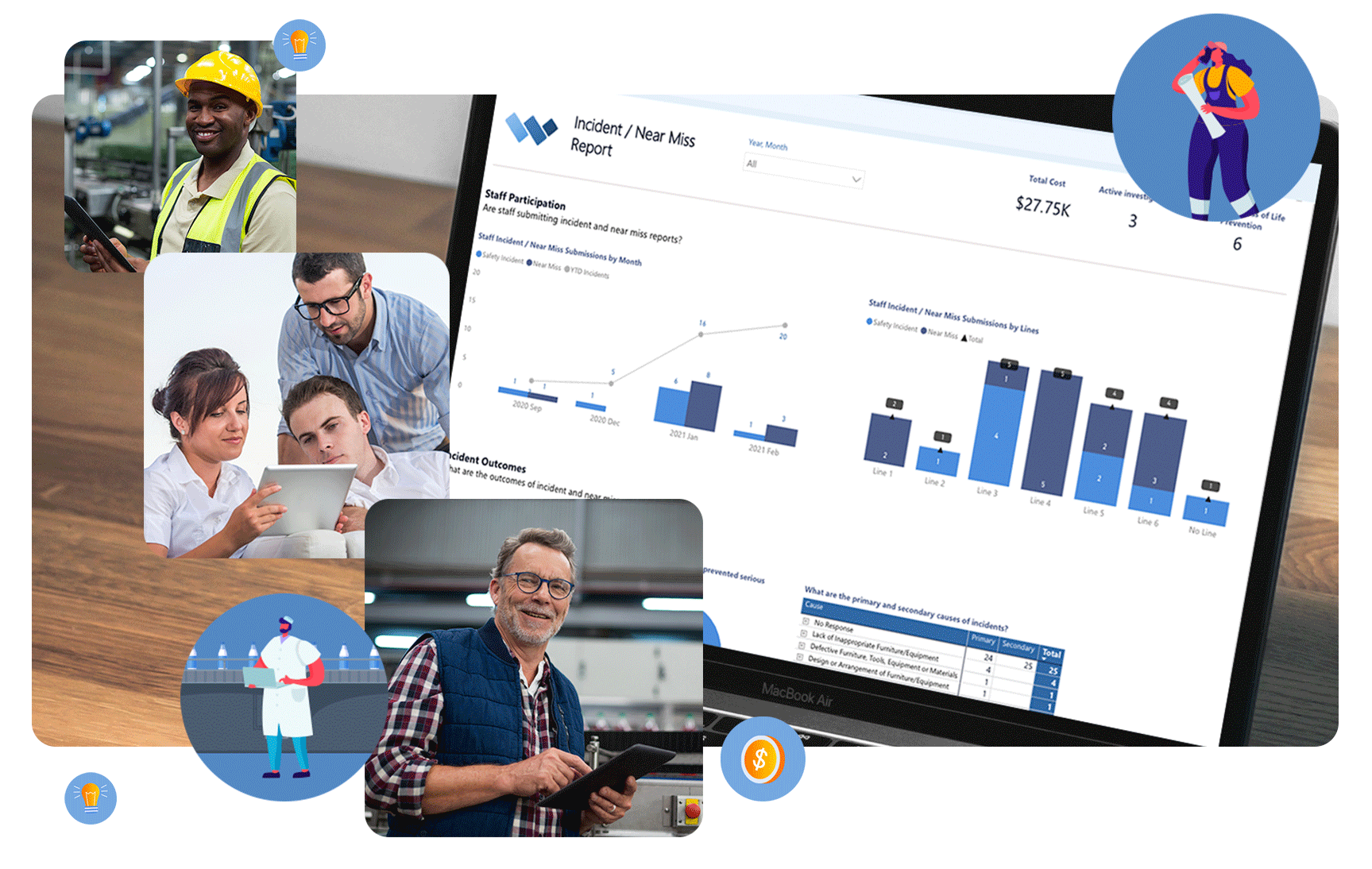 Weever is Operational Excellence Software that empowers the pursuit of perfection by enhancing operational visibility, collaboration and productivity in quality, maintenance, safety and production.

Manage your site with Tickets. Automatically generate tickets when a form is submitted for supervisor evaluation. Assign, add a due date, create action item task.

Push Weever data in real-time to your organization’s Power BI account. Create beautiful graphs and data visualizations yourself or enlist our help to build them for you.

Weever Enterprise is one site license which provides you with unlimited forms, submissions and users for each site.

If you are already using Tableau to manage your organization’s “data lake”, use our Tableau integration to push data in real-time to Tableau. Build you own reports or enlist Weever’s help to build them for you.

With Weever Enterprise you have free access to our growing Template Library, which consists of form and report templates that can be customized to suit your needs. Simply select the template, add it to your app, customize as you see fit, and launch. The Weever Team can help you in any way you require to update forms and business intelligence reports. View the available templates here: https://weeverapps.com/templates/

Build and manage your account your way. Add information about your organization that can be used in form, such as line, work Areas, products, machines, equipment, etc.

Top-down, bottom-up holistic alignment. Understand at a glance the status of your improvement and prevention projects and how they align with your organizational objectives.

We’ve got you covered. If you’re looking for additional help in building out your internal cross-departmental reporting system (Power BI, etc.) or are interested in adding custom features to your Weever account, we are here to assist.

With Weever Enterprise, you have access to the 24/7 ticket support available to Starter customers, as well as access to a dedicated Customer Success Representative. This representative is available to help with Form Building, answer questions, help with onboarding and training for other supervisors and administrators.

Our Rewards and Recognition Add-On module allows you to reward staff for providing data from the front lines, thus ensuring engagement. Managers simply add points to forms which can be banked and redeemed for rewards in your self managed Rewards Marketplace.

Our team will work with you to ensure your forms and reports are perfect before your launch. You have access to the form builder tool so you can edit your forms later if you wish to make additional changes.

When you’re ready to add additional use case templates to your account – we’re here to help. Simply select from a pre-built template library. Or you can send us your forms and we can build them for you. Or you can build them yourself. It’s up to you. Each new use case costs only $99/month/site or $1,188/year/site on an annual plan (save a month).

Access a comprehensive library of form and report templates. Start with 1 use case template build as you go. Our Customer Success Team will help you customize the templates to suit your unique needs. You can also scrap the templates and create a custom form from scratch.

The Weever Process module allows administrators to create project templates that can be launched by employees. Each template provides employees with the approved steps and task that are required to complete the project and be compliant to internal SOPs as well as external compliance requirements.

The Weever Documents module is a document management platform that ensures your staff have access to the right document at any time. The software comes complete with comprehensive document approvals functionality as well as a published documents library that is available to your staff members.

The Rewards & Recognition module allows you to reward staff for providing data from the front lines, thus enhancing employee engagement. Managers simply add points to forms which can be banked and redeemed for rewards in your self-managed Rewards Marketplace.

Create custom integrations to other business systems within your organization. Share Weever data in real-time to your ERP, accounting system, etc.